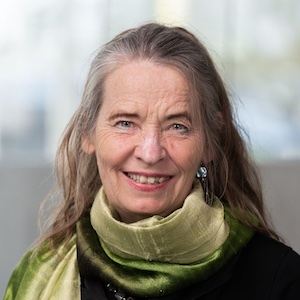 Dorothee Ostmeier is a Professor of German, and Folklore and Public Culture. She also serves as Affiliated Faculty of Comparative Literature, Women and Gender Studies, and the Center for the Studies of Women in Society (CSWS).

Ostmeier’s research and teaching focuses on the borders between German literatures, culture, and philosophies of the 18th to the 21st centuries. International reviews of her book Sprache des Dramas-Drama der Sprache; Nelly Sachs’ Dramatische Szenen, recognize this study as one of the few works that analyze Sachs’ cryptic dramatic writings, which she composed after escaping Nazi persecution in 1941. Ostmeier’s analysis situates Sachs’ oeuvre within the ongoing debate on obsessive memory in the face of the universal disappearance of idealist utopias.

Ostmeier’s courses on fairy tales, fantasy and the uncanny tackle the moves from utopian to anti-utopian tales and have inspired several essays on Michael Ende’s and Cornelia Funke’s fantasy texts, the film “Ever After” and the link between the Grimms’ concepts of nature and the marvelous. The essays examine how these fantasy texts and films interrogate the borders between reality and fiction and expose the psychological and social risks of crossing such borders. Ostmeier views the popular fascination with such risks as a desire for an ethics that evades the violence of authoritative structures. The essay “Rafik Schami’s Tales about Fairy Tales” places this topic in the context of the hybridity of postmodern storytelling. The following essays have been recently published: “Frogs and Salamanders as Agents of Romanticism.” (MLN, 2014). “Politik des Wunderbaren: Nationale Identität und Utopie in ausgewählten Werken der Gebrüder Grimm. Märchen, Mythen und Moderne: 200 Jahre Kinder- und Hausmärchen der Brüder Grimm (Frankfurt: Peter Lang, 2015). “The Feminine Beast: Exploitation vs. Liberation in Early 20th Century Literature.” (Fall 2014 in Web Journal Konturen: http://journals.oregondigital.org/index.php/konturen/issue/view/431

Recently she has launched a new monograph entitled “Portals-Shape Shifters-Singularity Events in Romanticism to Postmodern Digital Culture.”  She has made a number of contributions to COLLATERAL – Online Journal for Cross-Cultural Close Reading (http://www.collateral-journal.com/) housed in Belgium. In summer 2017 she was invited to edit a collaborative interdisciplinary cluster of contributions to COLLATERAL, and recently collaborated with colleagues from Music to publish the Oregon Cluster on the Multi-Interpretability of artifacts like Goethe's poem "Über Allen Gipfeln ist Ruh." She is also preparing the following invited lectures: “Ich bin ein Gedicht”, “Mermaides in the Context of Gender and Ecocritcism,” and “Nature-Non Nature in Lebensreform Contexts.”

From Fall 2002 to 2012 Ostmeier acted as Director of Graduate Studies, and for 2012-2014 she was elected as College of Arts’ and Sciences’ representative on the UO’s Graduate Council. She has served as a member of the Advisory Board of the Oregon Humanities Center, and as Humanities Representative on Arts and Sciences Curriculum Committees. Ostmeier has initiated, and for many years co-organized the German outreach program to public schools, the manifold activities of the Healing Arts Research Interest Group at CSWS, GERSCAN’s SAIL summer program, and engaged in the manifold discussions of the UO Language Councils (CAS and OIA). As Head of GERSCAN she has collaborated with many entities across campus on revitalizing the language studies and cross-disciplinary lecture and exhibition events. As elected CAS Wise Head for 2016/2017 she has served on CAS’ “Context for Scenario Planning Sessions,” and the committee on “Arts and Humanities Awards.”

HC 434H/421H: Magic, Uncanny, Surrealistic and Cynical Tales
Crossing cultural and genre boundaries, fairy and fantasy tales have been vibrant sources for revisions and exploration of controversial issues, as for example, questions of aesthetic utopias, class and gender struggles, child abuse, civil rights, etc. We will study the cross-cultural connections between popular fairy tales and their revisions in various contemporary media. This course will study artist Peregrine Honig’s “Father Gander” lithographs at the Jordan Schnitzer Museum of Art and host her public lecture: “Satire and Fairy Tale in Contemporary Art Projects of Peregrine Honig.” Discussions will be framed by investigations of theory of fantasy, as for example, by Walter Benjamin, Tzvetan Todorov, Mark Fischer, and a cultural theory of cynicism. 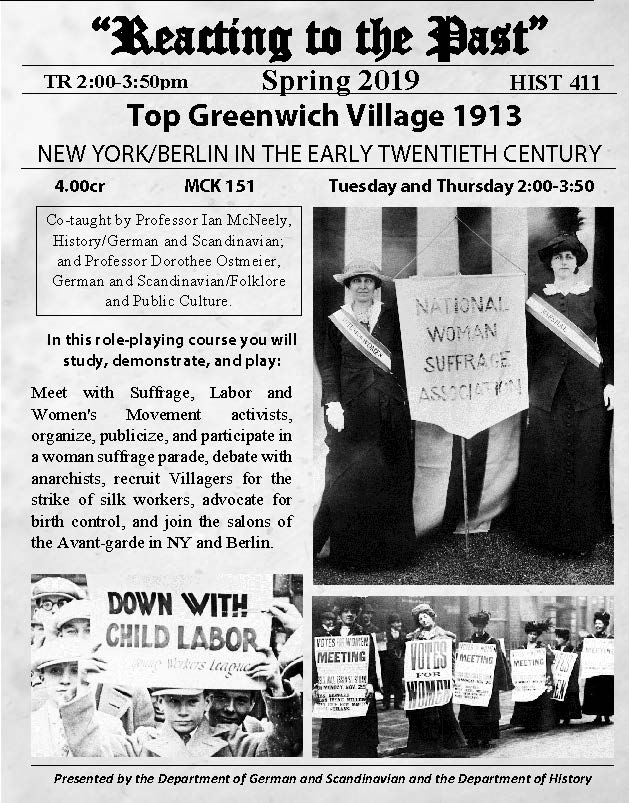 HIST 411: Reacting to the Past, Top Greenwich Village 1913
New York and Berlin in the Early 20th Century
This course, co-taught by Professors Dorothee Ostmeier and Ian McNeely is based on the "Reacting to the Past" pedagogy developed at Barnard College. In most classes students learn by receiving ideas and information from instructors or texts, or they discuss such materials in seminars. "Reacting to the Past" courses employ a different pedagogy. Students learn by taking on roles, informed by classic texts, in elaborate games set in the past; they learn skills -- speaking, writing, critical thinking, problem solving, leadership, and teamwork -- in order to prevail in difficult and complicated situations. That is because Reacting roles, unlike those in a play, do not have a fixed script and outcome. While students will be asked to adhere to the philosophical and intellectual beliefs of the historical figures they have been assigned to play, they must devise their own means of expressing those ideas persuasively, in papers, speeches, or other public presentations; and student must also pursue a course of action they think will help them win the game. There are several Reacting games. The course will play one, such as "America's Founding: the Constitutional Convention," or "The French Revolution." Students will read many period documents and research their assigned parts. 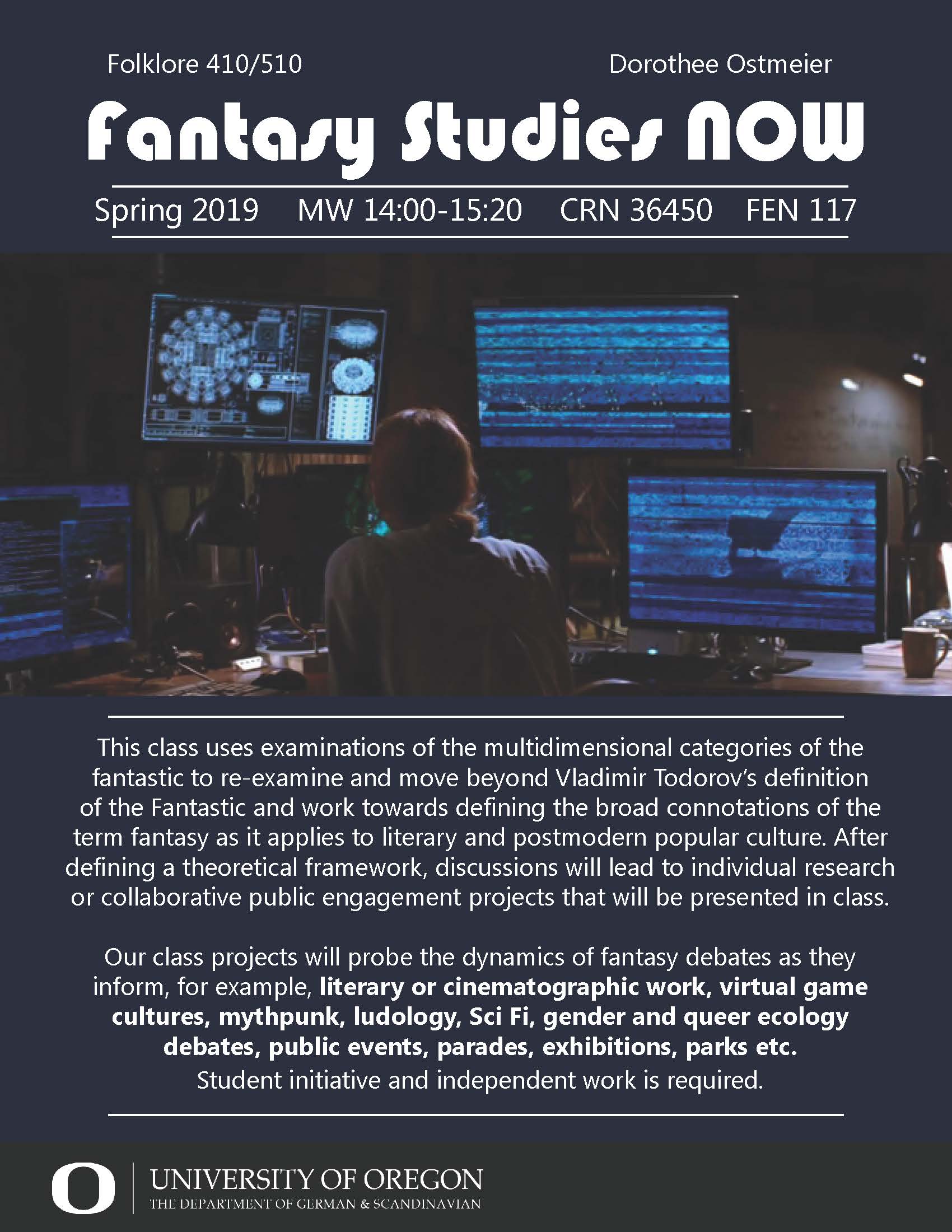 Critical examinations of the multidimensional categories of the fantastic will re-examine and move beyond Vladimir Todorov’s definition of the Fantastic and work towards defining the broad connotations of the term fantasy as it applies to literary and postmodern popular culture. After defining a theoretical framework, discussions will lead to individual research or collaborative public engagement projects that will be presented in class. These projects will probe the dynamics of fantasy debates as they inform, for example, literary or cinematographic work, virtual game cultures, mythpunk, ludology, Sci Fi, gender and queer ecology debates, public events, parades, exhibitions, parks etc. Student initiative and independent work is required. Read about this class and view highlights here: https://blogs.uoregon.edu/folklore/2019/06/07/fantasy-studies-now-highlights-from-spring-2019/

Mermaiding: German Avant-garde Filmmaking and Portland Lore
A Lecture and Workshop on Combining Academic Research and Artistic Filmmaking
Experimental film artists Miriam Gossing & Lina Sieckmann from Cologne, Germany, will present their work with Mermaid activists from Portland, OR and Teenage Vampires from Forks, WA., and talk about the relationship of literature and film and the influence of Folklore and Fantasy. Their work uses documentary imagery, fiction, and found footage to inform the cinematographic presentation of architecture, hyper-staged environments as landscapes of desire.
GER 407/507 Cynicism as Code: Enlightenment and Anti-Enlightenment Ideologies
Sloterdijk's "Critique of the Cynical Mind" (1983) cuts harshly through the pre-dispositions of many disciplines in the Humanities and Social Sciences in order to unleash critical sensibilities towards Enlightenment and Anti-Enlightenment ideologies of identity and rationality. Cynicism negotiates the thresholds between ideologies and systems of thought, religions, political, psychological and egocentrically driven actions. Sloterdijk's critique was published only one year before Foucault's investigation of cynicism (1984). We will read relevant passages by Sloterdijk and Foucault, and ask how they might inform our engagements with Enlightenment and post-Enlightenment works. Further discussions might include texts by Luther, Lessing, Goethe, Hoffmann, Heine, Nietzsche, Benn, Brecht, Expressionist and Dadaist art. Students will choose their own individual area of research, give one in-class presentation, and complete a final research paper or media project. This class will be taught in English with readings in German and English (crosslisted with Folklore and Public Culture). 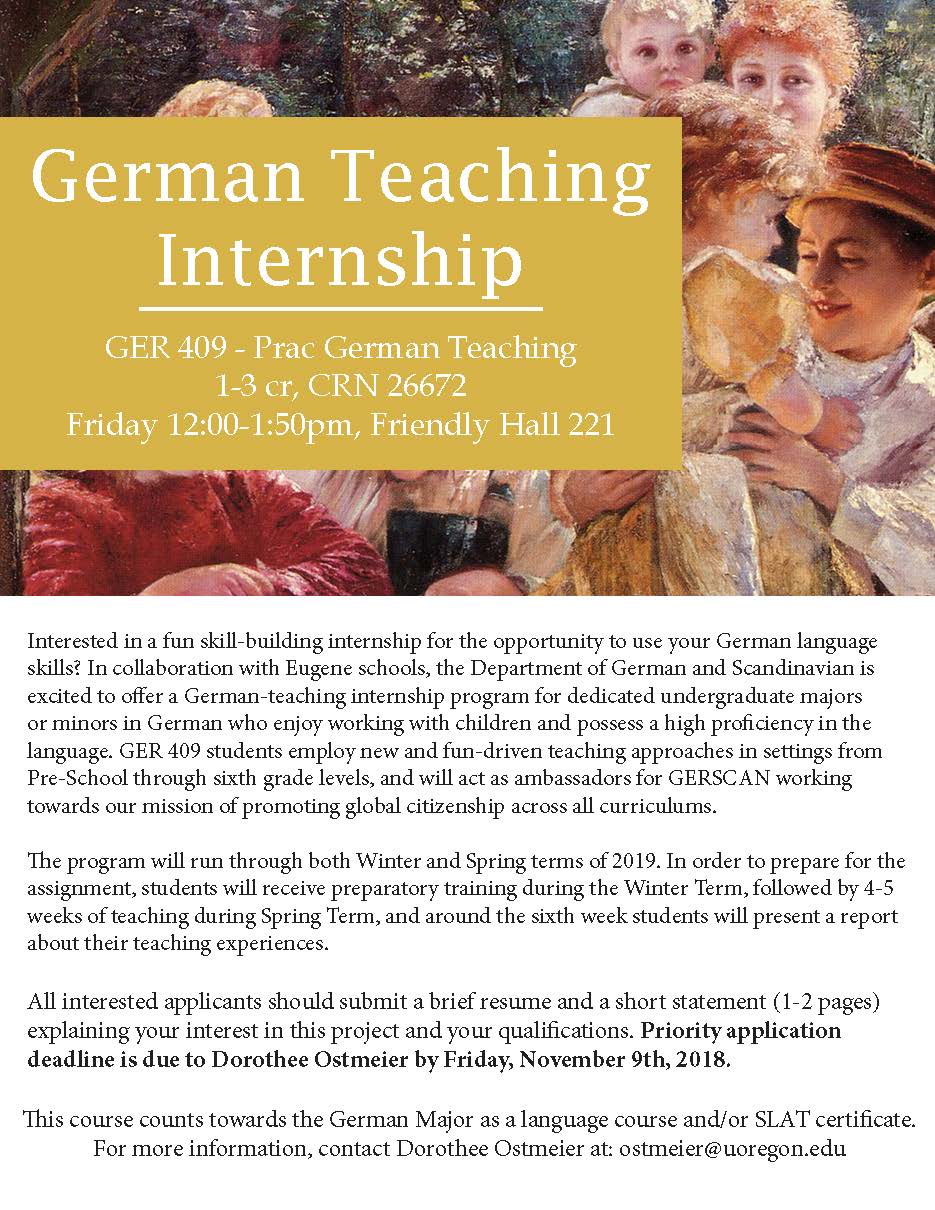 GER 409: Teaching Internship
In collaboration with Eugene schools, the Department of German and Scandinavian is excited to offer a German-teaching internship program for dedicated undergraduate majors or minors in German who enjoy working with children and possess a high proficiency in the language. The program will run through both winter and spring terms of 2019. GER 409 students employ new and fun-driven teaching approaches in settings from Pre-School through sixth grade levels, and will act as ambassadors for GERSCAN working towards our mission of promoting global citizenship across all curriculums. In Winter Term, students learn teaching and pedagogical strategies and apply these skills in Spring term by visiting the Eugene Public School system and leading German classes and activities for elementary aged children. Click here to watch “Fun with German” internship at Edison Elementary School. 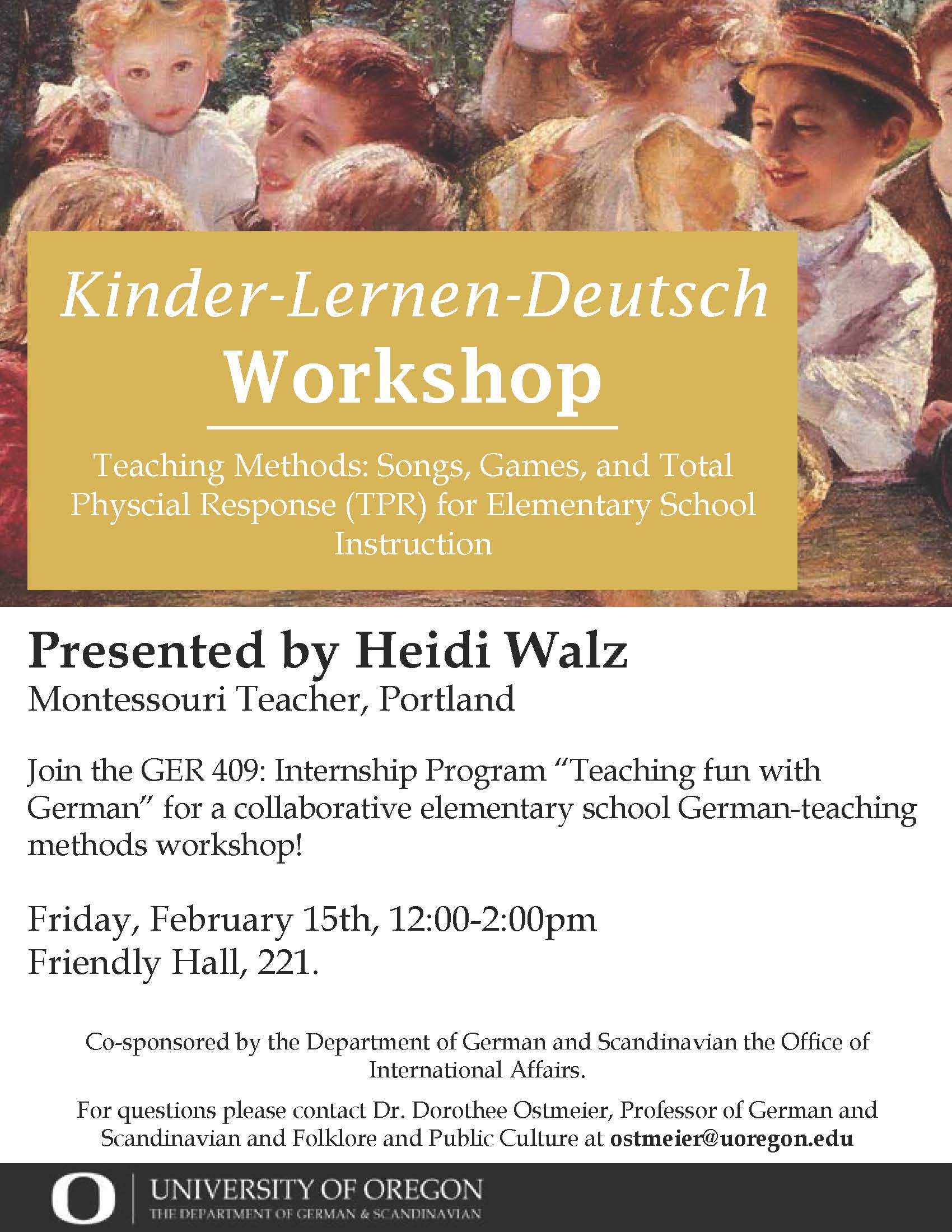 Transdisciplinary Careers Beyond the Academy: Linking Humanities and Science presended by Dr. Clemens Ackermann
Clemens Ackermann works as research coordinator and is in charge of the internationalization initiative at one of Germany's largest Research Campuses: ARENA2036 (www.ARENA2036.de). The Active Research Environment for Next Generation of Automobiles is a highly flexible research factory that focuses on Production, Mobility, and Work of the Future in the context of digitalization. C. Ackermann received his PhD from Northwestern University and an MA from the UO with a focus on German Literature and Critical Theory.

GER 354  German Gender Studies: Mermaids and Shapeshifters in the Context of Gender Studies
Study of mermaids, undines, gorgons, shapeshifters and other hybrid figures as they penetrate the history of mythology, folklore, literature, music and art. Contemporary gender theories will guide our discussion of these figures’ tensions between sex and gender, the longing for and loss of transcendence, fantasy and reality, nature and culture. We will focus on poetic texts and inter-texts from the 16th to the 20th centuries, including texts by Paracelsus, Goethe, Eichendorff, Heine, Hoffmann, Fouque, Keller, Kafka, Schwitters, Bachmann, Sachs, and Frischmuth.

GER 407 Fairy Tales (Seminar)
Fantasy crosses the boundaries of national literature and cultures by inserting its presence in a broad variety of genres. Critical examinations of the multidimensional categories of the fantastic will re-examine and move beyond Vladimir Todorov’s definition of the Fantastic and work towards defining the broad connotations of the term fantasy as it applies also to postmodern popular culture. The study of fairy tales is closely linked to controversial debates about the complex aesthetic, philosophical and social connotations of fantasy and the imaginary. We will examine the transitions from magic to uncanny, surrealist, and fantasy tales in texts from Romanticism to the 21st century, and rethink and refashion our perceptions of reality by challenging the fluid borders between various fictive realities.  Texts to be discussed include tales by Jakob and Wilhelm Grimm, Johann Wolfgang Goethe, Novalis, Ludwig Tieck, ETA Hoffmann, Franz Kafka, Ingeborg Bachmann, Christian Kracht,  Rafik Schami. As theoretical frameworks we will study texts by Friedrich Schlegel, Stith Thompson, Vladimir Todorov, Sigmund Freud, Walter Benjamin, Peter Brooks, and Gilles Deleuze and Felix Guattari. Individual research projects that are linked to fantasy studies are encouraged and will expand the horizon of our discussions. German undergraduate students will be invited to meet for an additional hour for discussions in German.

CAS 101H Reacting to the Past
In this course you will study, act, and play. You’ll meet with suffrage, labor and women’s movement activists. Organize, publicize, and participate in a woman suffrage parade. Debate with anarchists, recruit villagers for the strike of silk workers, advocate for birth control, and join the salons of the avant-garde in New York and Berlin.

Ostmeier about her love for teaching: A Journalism student’s perspective, Nov 2020:

"The future lies with young people. And if I can contribute to the vibrancy of young minds — I think I serve this society and this world in a way which I like: setting seeds for the future."

"There is a creative power in everyone. And if people find the right conversations, they can bring about change. "

Project 1: Fairy tales, fantasy, and the uncanny, invited/collaboration with the Office of International Affairs, University of Oregon, Spring 2016

Project 3: Fairy Tale Video: This video explores the world of fantasy and its relation to both national literature and postmodern popular culture. Click here to watch!