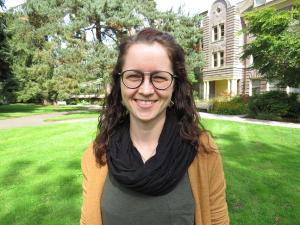 After this, she was awarded an internship teaching German as a foreign language in Nepal.  She is also a licensed ÖSD (Austrian language diploma) examiner.  Her research interests include fin-de-siècle and 20th century German literature, German and English linguistics, translation studies and poetry.

Outside of class, Lisa enjoys traveling, biking, hiking and other outdoor activities.  She also loves to do yoga, cook and bake.