GER 507 Seminar: Tyranny Redux (4 credits) Calhoon
CRN: 12867. Concentrated in the person of Donald Trump are nativist and undemocratic tendencies that not only preceded his presidency but seem only to have gained in strength following his electoral defeat in November 2020. Over these past few years we have seen the aspirations of a major party reduced to the personal needs of its new figurehead—a leader whose guiding sense of grievance and betrayal, whose incitements to violence and concomitant fear of appearing weak, whose claims to absolute political sovereignty, not to mention a disdain for religion that endears him to the faithful, have invited comparisons to prior authoritarian regimes, Germany’s Third Reich in particular. This seminar is designed to examine the current cultural and political moment under the lens of critical methods and analyses that arose before, during, or in the wake of the earlier one. Key readings to include: Max Weber, The Protestant Ethic and the Spirit of Capitalism; Walter Benjamin, Critique of Violence; S. Freud, Totem and Taboo and Beyond the Pleasure Principle; Max Horkheimer, “Authority and the Family”; Alexander Mitscherlich, Society Without the Father; Hannah Arendt, The Origins of Totalitarianism; Klaus Theweleit, Male Fantasies. We will also consider more recent and contemporary writings by Norman O. Brown, Alice Miller, Heather Cox Richardson, Timothy Snyder, Christopher Browning, Wendy Lower, Mary Trump, and Bandy Lee. Michael Haneke’s brilliant film The White Ribbon (2009) may prove pivotal to our discussions. Course to be conducted in English, though students may choose to read German texts in German or in translation. 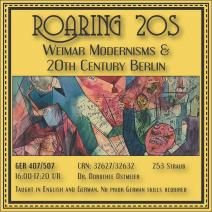 CRN: 32632, taught in taught in English and German, no prior German skills required.    By analyzing literary and visual arts and film of the early 20th Century we will study the radical changes in the representation and interpretation of the Metropolis Berlin--a vibrant center for cultural diversity and modernist aesthetics. Our discussions will focus on the tense relations between expressionist pathos and new objectivity, between individuality and appealing mass anonymity. Topics include: Life as Montage, Denunciation of the Bourgeois, Social Corruption, Pathos vs. Objectivity, Celebrity Culture. Reflections by Walter Benjamin, Siegfried Kracauer, Georg Simmel and Sigmund Freud will guide our thinking. As final project students will collaborate and design a historically informed interactive presentation. 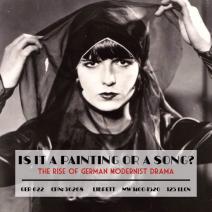 GER 622 Drama: Is it a Painting or a Song? The Rise of German Modernist Drama (4 credits) Librett

CRN: 36268. Readings will be made available in German and English. Class discussions are held in English. Writing can be done in either language. This course examines the aesthetics of modernist drama (including several modernist operas), principally as situated between the polarities of subject and object, empathy and abstraction, and voice and gaze. We start by setting the frame with brief selections from G.W.F.Hegel, Wilhelm Worringer, and Jacques Lacan. We then trace the main stages of the emergence of modernist drama from naturalism (late nineteenth century) to post-expressionism. We read plays by: Georg Büchner, Gerhard Hauptmann, Frank Wedekind, Gottfried Benn, Bertolt Brecht, Thomas Bernhard, and Elfriede Jelinek, as well as theory from the expressionist-realist debates by Georg Lukacs, Ernst Bloch, and Brecht. Music dramas composed by Alban Berg, Arnold Schönberg and Kurt Weill, and as well as films by Joseph Pabst and Werner Herzog, and paintings from naturalism to neo-expressionism, will also be explored.
​​​​​ 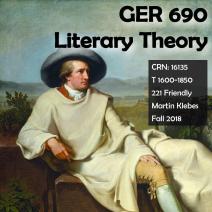 Structured not chronologically but rather by select methodological aspects, this seminar presents a review of major strands of theoretical thinking in literary studies, predominantly in the 20th century (with short forays into the 19th and the 21st). Key concepts to which individual sessions will be devoted will include interpretation, history, intention, reception, sign, critique, society, gender, and philology. As a core course for the graduate programs in German, this course is projected to be instructed in German, but we will find ways to accommodate interested students from other disciplines. 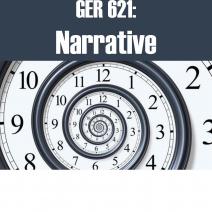 This course provides a general introduction to narratology from around 1960 until today. After working through a general overview of "classical" narratology and considering some "post-classical" (i.e. contemporary) perspectives, we will focus more narrowly on the questions of temporality and consciousness in narrative, especially as these become thematic in the theory and practice of "stream of consciousness" narrative. The reading of theory will be accompanied by the reading of literary narratives, which will serve throughout as occasions for the applicatino of theory to the activity of interpretation. 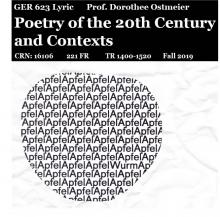 Different poetic styles of this period reflect crises of, with, and in language. Selected poems, theoretical treatises and manifestos of the 20th Century will be discussed as condensed reflections and enactments of relations between aesthetic, philosophical and political discourses. These discussions will also be based on rhetorical and metrical analyses. Authors might include Jacob van Hoddis, Georg Heym, Ernst Stadler, Hugo von Hofmannstal, Rainer Maria Rilke, Else Lasker-Schueler, Bertolt Brecht, Gottfried Benn, Ingeborg Bachmann, Paul Celan, Nelly Sachs, and Alexander Nitzberg. 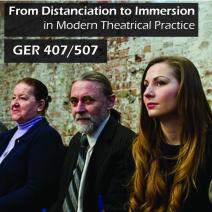 This seminar will explore the boundaries of modern German theatrical practice by examining how playwrights and theatre directors since Brecht have extended the role of the audience from witness to co-actor and even co-creator of a given performance. We will look at the epic plays and post-dramatic staging practices that address the role of teh theatre and performance arts in society by working toward the production of a particular form of immediacy. We will ask, in other words, how the theatre can, through the accommodation of a space for political opposition and the creation and implementation of playful interaction and even interactive tasks, create unique experiences of distanciation and immersion. 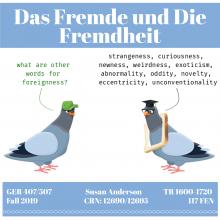 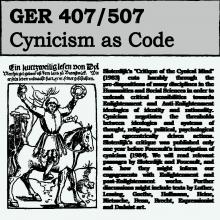 Sloterdijk's "Critique of the Cynical Mind" (1983) cuts harshly through the pre-dispositions of many disciplines in the Humanities and Social Sciences in order to unleash critical sensibilities towards Enlightenment and Anti-Enlightenment ideologies of identity and rationality. Cynicism negotiates the thresholds between ideologies and systems of thought, religions, political, psychological
and egocentrically driven actions. Sloterdijk's critique was published only one year before Foucault's investigation of cynicism (1984). We will read relevant passages by Sloterdijk and Foucault, and ask how they might inform our engagements with Enlightenment and post-Enlightenment works. Further discussions might include texts by Luther, Lessing, Goethe, Hoffmann,
Heine, Nietzsche, Benn, Brecht, Expressionist and Dadaist art.

Students will choose their own individual area of research, give one in-class presentation, and complete a final research paper or media project. This class will be taught in English with readings in German and English (crosslisted with Folklore and Public Culture). 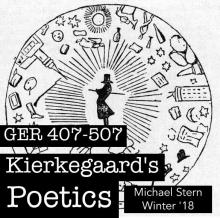 The official version of Søren Kierkegaard’s legacy labels him a philosopher, a religious thinker, and the father of existentialism. Yet, in a notebook entry from the early 1850s Kierkegaard wondered: “What do I have to offer? I am a poet. Alas, only a poet.” How do we explain this distance between how scholars and thinkers have viewed Kierkegaard’s writings and how he viewed his own writings? What does his philosophy share with what we commonly call literature and how does it differ? Why would this the form of his writings even matter? Our approach to answering these questions becomes clearer when we remember that at the very end of his career and shortly before his death, Kierkegaard, famous for stating that his philosophical communication was “indirect,” wrote that he had never been anything but a Socratic thinker. Now if we take Kierkegaard at his word, and regard him as a poet, this can appear to be a curious postulation, for Socrates, the legendary Greek, never wrote a word; while Kierkegaard tirelessly wrote two sometimes three books at once. Yet upon closer investigation it soon becomes apparent that Kierkegaard meant that while he could never tell us what he meant directly, he could, like Socrates spur us to thought through the use of irony. For if one recalls that Kierkegaard once described irony as the “way to truth but not the truth,” we can ascertain that he somehow understood the conveyance towards truth to be different than truth itself.

In this course we will read selected texts from Kierkegaard’s aesthetic writings with an eye trained on his employment of irony. To do so, we will begin by looking at some ancient texts depicting Socrates and then explore Kierkegaard’s understanding of these texts. Then we will read and discuss several of Kierkegaard’s pseudonymous works, all of which employ irony as both a rhetorical and epistemological strategy. In this way, we can better understand how Kierkegaard’s philosophical strategy conveyed a sense of the reader thinking into the text in a manner that suggests praxis, and how his work prefigures much of 20th century existentialist thought.

Texts under consideration will include but not be limited to: Aristophanes, Clouds. Plato. The Symposium. Kierkegaard: selections form The Concept of Irony, Either/Or (most prominently the Seducer’s Diary), Fear and Trembling, Repetition, Philosophical Fragments and The Concept of Anxiety. 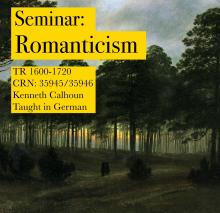 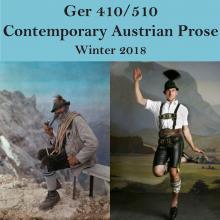 What is the relationship between nationalism, patriotism, and national identity? Is "Heimat" a political construct, a utopian vision, or simply a nostalgic concession to provincialism? To what degree is our sense of belonging imposed by historical exigencies, disrupted by repressed memories, and informed by cultural clichés? Is it possible to find a new "Heimat" away from one's home? These deeply contemporary questions will inform our discussion of Austrian prose works by Bachmann, Bernhard, Handke, Jelinek, Menasse, Musil Schneider, and Winkler. Topics include pastoralism, anti-Heimat-Literatur, the Nazi past, Catholicism, Nestbeschutzer, traditionalism, tourism, and more. 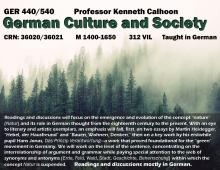 Readings and discussions will focus on the emergence and evolution of the concept “nature” (Natur) and its role in German thought from the eighteenth century to the present. With an eye to literary and artistic exemplars, an emphasis will fall, first, on two essays by Martin Heidegger, “Hebel, der Hausfreund” and “Bauen, Wohnen, Denken,” then on a key work by his erstwhile pupil Hans Jonas, Das Prinzip Verantwortung—a work that proved foundational for the “green” movement in Germany. We will work on the level of the sentence, concentrating on the interrelationship of argument and grammar while paying special attention to the web of synonyms and antonyms (Erde, Feld, Wald, Stadt, Geschichte, Beherrschung) within which the concept Natur is suspended. 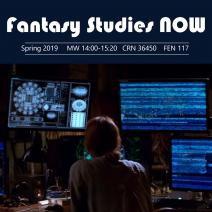 This class uses examinations of the multidimensional categories of the fantastic to re-examine and move beyond Vladimir Todorov’s definition of the Fantastic and work towards defining the broad connotations of the term fantasy as it applies to literary and postmodern popular culture. After defining a theoretical framework, discussions will lead to individual research or collaborative public engagement projects that will be presented in class.