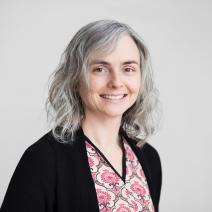 After graduating in June 2017, Alexis B. Smith spent the summer teaching first and third year culture courses and co-directing a choir at the Middlebury German School in Vermont. She and her family then moved to Ohio, where she held a position as Visiting Assistant Professor in the Department of German Language and Literatures at Oberlin College. In addition to teaching first and second year languages courses and a third-year literary survey course, she had the pleasure of offering “GERM 308 – Music in Literature and Literature in Music,” a course derived from her dissertation. This summer she and her family will move to Crawfordsville, Indiana for a Visiting Assistant Professorship at Wabash College. There she will offer her music and literature course again, as well as first and third year language courses, and a new course either in translation studies or novel to film adaptation. Alexis is currently working on a manuscript entitled, “Resounding in the Human Body as the Language of Nature: Reading Sound Figures in Novalis’ ‘Die Lehrlinge zu Sais,’” which she will submit for publication this summer. She will present from this article for the Music and Sound Studies Network panel, “Sounded on the Body,” at the German Studies Association Conference this September in Pittsburgh, Pennsylvania. 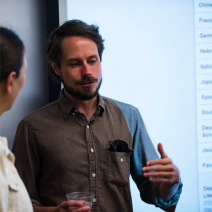 Since leaving the University of Oregon to assume the position of Visiting Assistant Professor of German at Oakland University in the Detroit metropolitan area, Rob Mottram has continued doing what he loves: teaching students the art of language, literature, and critical thought; absorbing himself in matters of aesthetics, mimesis, and the philosophy of literature; and listening to serious music. He has been able to teach a wide variety of courses from beginning German to a capstone course on longing and resignation in 19th-century German literature, and has also presented his research at multiple conferences including the International Conference on Romanticism as well as the German Studies Association. He is currently at work editing a collection of critical essays, tentatively titled The Inexhaustible Gathering: Assembly and its Other in German Romantic Literature, Science, and Society, to which he will contribute a chapter on aesthetic education in E.T.A. Hoffmann’s “My Cousin’s Corner Window.” Another of his essays, "The Memorialization of the Aesthetic and the Aestheticization of Memory: Reading the Hermit in Novalis’ Heinrich von Ofterdingen," is set to be published in an edited volume on Romanticism and memory. His experiences at the University of Oregon with friends, students, and faculty members continue as living dialogues—fodder for much thought and thankfulness. 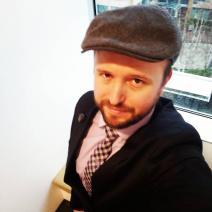 I'm working in Seattle as a Program Manager at Microsoft. Things I honed in graduate school and graduate teaching/instructing at the U of O, such as organization, interpersonal communication skills, time management, and critical thinking have served me well in this role and are helping me to work towards a career in project management.

As for the program, I consider my time learning German as both an undergraduate and graduate student at the U of O to be the most formative experience in my education. Learning another language was a paradigm shift that changed my way of viewing the world and my daily experience. It also opened me to opportunities to work with people from around the world, learning of other cultures and perspectives, in pretty much every job role or educational position since. Also, the graduate courses taught me critical theory and my initial exposure to philosophy which have dramatically impacted my life more than anything else I've learned. They were the initial planting of a seed that I continue to nourish into growth and blossoming throughout the rest of my life. I'm extremely grateful for my time in the program. 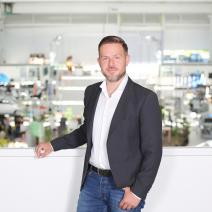 The German and Scandinavian Department of the University of Oregon gave me the chance to focus on my field(s) of interest while simultaneously sparking new interest in other areas of Literature and Critical Theory. The constant availability of all faculty members, the way that faculty and students work together and the distinguished seminars offered and taught––not only by the Professors of German and Scandinavian, but also by faculty-members of other departments––created an enriching study and work environment that allowed me as a student to grow professionally. A big part of this professional growth was the chance to teach language classes for undergraduates which I very much enjoyed. The high-toned and rewarding graduate program of the German and Scandinavian Department was the perfect environment for me to acquire a certain level of expertise that I was fortunate to further develop during my PhD Studies at Northwestern University (PhD, 2017).

Since 2018 I am working at the Research Campus ARENA2036 as a research coordinator and am also responsible for the internationalization initiative (www.arena2036.de).

Alexis B. Smith (Ph.D. 2017) published an article titled “Ritter’s Musical Blood Flow Through Hoffmann’s Kreisler” in the book The Early History of Embodied Cognition 1740-1920: The Lebenskraft-Debate and Radical Reality in German Science, Music, and Literature (Brill|Rodopi 2016).

Felicitas Hoppe, who received her MA in German from the University of Oregon in 1986, has been awarded the Georg-Büchner prize, the most important literary prize for the German language (2012).

Daniel Gilfillan, who received his Ph.D. in German from the University of Oregon and is currently an Assistant Professor of German Studies and Information Literacy at Arizona State University, has published Pieces of Sound: German Experimental Radio with the University of Minnesota Press (2009).

Carla Damiano, who received her Ph.D. in German from the University of Oregon in 1998 and is a professor in the German Department at Eastern Michigan University, is receiving the Bundesverdienstkreuz for her work on the writer Walter Kempowski. She will receive this prestigious award on September 29, 2021 from the Consul General in Chicago.

Phil Hansen, who received his BA in German from the University of Oregon in 1967, has published a book on The History of Germanic Languages at Oregon,1878-2008 (2008).